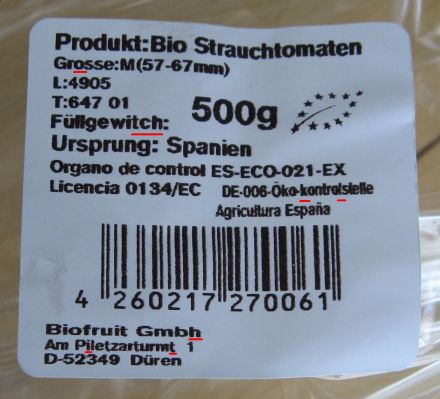 What happens when a vendor tries to sell its wares in another European Union country, but skims on proper localization? No, this doesn't only happen in software; today, I found a funny example in the supermarket: organic tomatoes from Spain. The simple label contains 7 mistakes: missing umlaut, swapped letters, wrong capitalization, additional letters. Seems like someone quickly jotted down the label information on a piece of paper or fax, but the person that actually created the label knew next to nothing about the German language, and nobody bothered to cross-check. 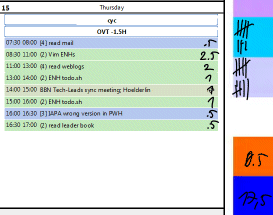 Just got bitten by a regression in Microsoft Outlook 2007: For task tracking, I print my Outlook calendar each week, using the Weekly Style, add a template for my task categories to it via the powerful FinePrint utility printer driver, then print to the Microsoft Journal writer virtual driver, in order to use my Tablet PC's pen to annotate the calendar with the duration of each task, then add up the time spent in each category and quadrant (according to Stephen R. Covey's 7 Habits). (If this sounds complicated, I usually do this and fill out two more time sheets based on that data in less that half an hour. It's not fun to do, but I've optimized this through powerful tools so that I can focus on more productive tasks as quick as possible.)

Suddenly, this morning, the end times of each task were missing. Did I accidentally change something? Is it one of those Windows quirks that can be fixed by re-configuring or rebooting? Or did some Microsoft patch (that was silently installed by our corporate software update tool) break it? After fiddling for a couple of minutes with the Page Setup dialog, a Google search indeed acknowledged that this is a regression:

Another print bug in Outlook 2007 SP2 and earlier: subject lines are truncated. This is addressed by an April 2010 hotfix and included in the July 13 update. However, the end times don't print and the lines break between words. This will be fixed in a cumulative update expected Aug or Sept 2010.

As a workaround (as uninstalling the hotfix would probably only cause endless battles with the software update tool), I've changed the page layout from Top to Bottom to Left to Right, so that I can derive the duration from the time line on the left. In fact, this layout looks quite nice, and may even be more intuitive to use for me.
But Microsoft, hey, seriously?! I already had to cope with undocumented changes (the placement of the days on the two-column layout changed from vertical-horizontal to the opposite) when moving from Outlook 2003 to 2007. 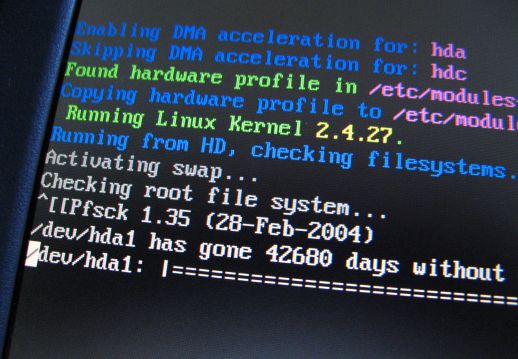 Everything except my former laptop's predecessor's predecessor have eased into the new year without problems. (I've finally pulled myself together to dismantle the Pentium-class Omnibook 3000; apart from the clock reset, it booted up just fine; even the battery almost lasted through the OS boot.)
No big year-2010 problems, neither; I only had to tweak my file glob for backup files (*.199?????? *.20???????) to be less short-sighted. Gosh, do I really make these ad-hoc backups for over 15 years now, using the same self-written tools and integrations for so many years?!
Well, it certainly has served me well over the years; my losses due to hard disk crashes and the inevitable mistakes have been small. Though I use modern revision control systems like Subversion and Git, too (for more and more use cases), this low-tech backup strategy has been the backbone of my personal backup strategy, and I take those tools everywhere I ssh and rdesktop to.